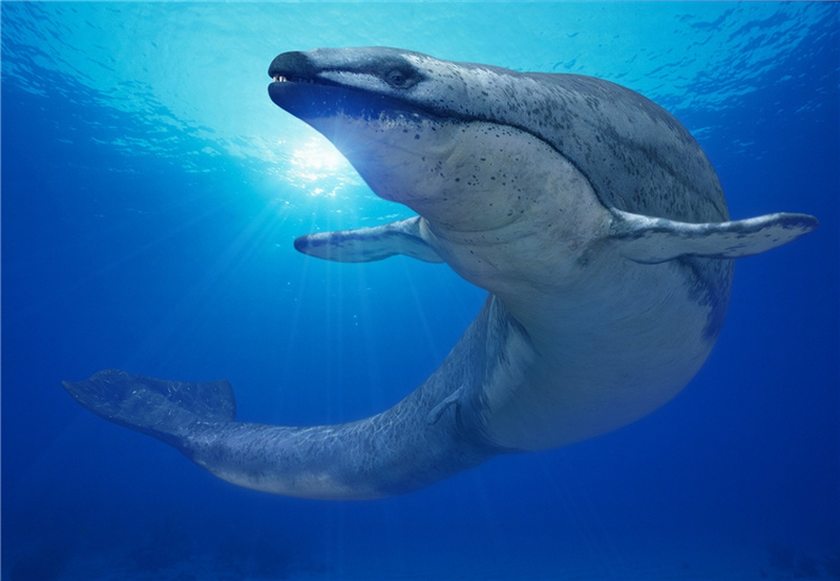 Giants literally roamed the earth before the ascendency of humanity. We know from the fossil record that ancient animals were not just big, they were huge.

For most of human history our ancestors shared the earth with giant prehistoric animals. Although the dinosaurs were long gone by the time our earliest ancestor, Homo habilis, walked the earth 2.3 million years ago, there were still plenty of behemoths around.

The massive beasts that our ancestors shared the earth with were relatives or ancestors of many of today’s animals, yet they were far larger. Such giants are now mostly extinct, but if humanity ever vanishes from the earth, the giants could return. Hundreds of thousands or millions of years into the future, our descendants might once more share the world with the giants.

The ancestors of today’s whales and porpoises lived at 34 million years ago. Unlike today’s whales, a Basilosaurus had flipper-like limbs similar to a seal’s and a long tail. A Basilosaurus typically grew to a size of 40 to 65 feet (12 to 20 meters) length, or about the size of a small ship. Interestingly enough, the name Basilosaurus means “king lizard” in Latin because the fossil hunters who found the creatures’ remains mistakenly thought they had discovered a new species of dinosaur. The real appearance of the Basilosaurus is unknown because a complete skeleton has never been unearthed.

Today’s crocodiles and alligators appear harmless when compared to their gigantic ancestor, Sarcosuchus Imperator. This monstrous creature looked like today’s crocodiles, but it could weigh up to eight tons and grow up to 12 meters (39 feet) in length, or the size of a truck. Fortunately for us, Sarcosuchus Imperator is long gone. It lived 112 million years ago, mostly in Africa and South America. Interestingly enough, many of the fossils of this giant reptile have been excavated in the Sahara Desert, one of the driest places on Earth. Paleontologists believe Sarcosuchus Imperator’s prey was dinosaurs, which explains its size.

A shark with the size of a yacht sounds like the stuff of nightmares, but such a creature really lived, it was called megalodon. The megalodon grew up to 59 feet (18 meters) in length and probably weighed around 20 tons. Its mouth was big enough to swallow a small boat. When Bashford Dean reconstructed a megalodon jaw in 1909, it was large enough for a fully grown man to sit in. The megalodon may have been too big. Scientists believe that its consumption of fish may have wiped out entire populations of fish and other marine life. Megalodon is considered to be the ancestor of today’s great white shark, one of the world’s most feared predators.

The furry prehistoric animal known as the steppe mammoth was the largest elephant that ever lived. Fossils of steppe mammoth up to 15 feet (4.5 meters) in height and nine to 11 tons in weight have been found. In contrast, modern African elephants are between 8.2 and 13 feet tall. Interestingly enough, the steppe mammoth’s size could protect it from our ancestors, who are believed to have hunted the giants to death around 300,000 years ago. Size was no protection against the numbers and cunning of early humans and their weapons. A steppe mammoth was just as vulnerable to a caveman’s spear as an elephant is to a modern hunter’s gun.

Imagine a snake that was big and long enough to capture and eat a dinosaur. Such a monster existed, it was called the titanoboa, or titanic boa. Scientists believe that this creature could grow up to 42 feet (12.8 meters) in length and weighed around a ton. The titanoboa is believed to have hunted dinosaurs because it lived 58 to 60 million years ago. There may have been larger snakes roaming the earth at that time that scientists are unaware of because snakes’ skeletons don’t fossilize well.

It is possible that lizards up to 26 feet long roamed the wilds of Australia just 30,000 years. These giants weighed between 730 and 1,300 pounds and moved at speeds up to six miles an hour. That makes megalania the largest lizard that ever lived. Interestingly enough, some scientists believe that megalania was venomous so its bite was extremely deadly. Like the steppe mammoth, the megalania was no match for human hunters. It became extinct about the time humans first reached Australia, meaning that people exterminated it. Science suggests that the megalania hunted other giant prehistoric animals, including marsupials.

The largest birds that ever lived existed just 350 years ago. The giant elephant birds of Madagascar were described by Etienne de Flacourt, the French governor of that island in the 1650s. These ostrich-like creatures grew up to 10 feet (three meters) tall and weighed up to 880 pounds (400 kilograms). They also laid eggs that were up to one meter wide. At least four species of the birds are believed to have existed. These giants became extinct in the mid-17th Century—about the time that European pirates introduced firearms to Madagascar, so they were probably hunted to death.

This giant was probably the largest land animal that ever lived. Scientists estimate that it could have weighed up to 111 tons and was 30 feet (10 meters) tall. That means it was the size of a house or a small office building. Amphicoealias was a gentle giant that probably ate ferns because grass had not yet evolved when it roamed the earth in the Triassic period around 200 million years ago. The dinosaur grew to such a huge size because the large size made it a more efficient plant eater.

What Kind of Perfectionist Are You?

Why few people are left-handed