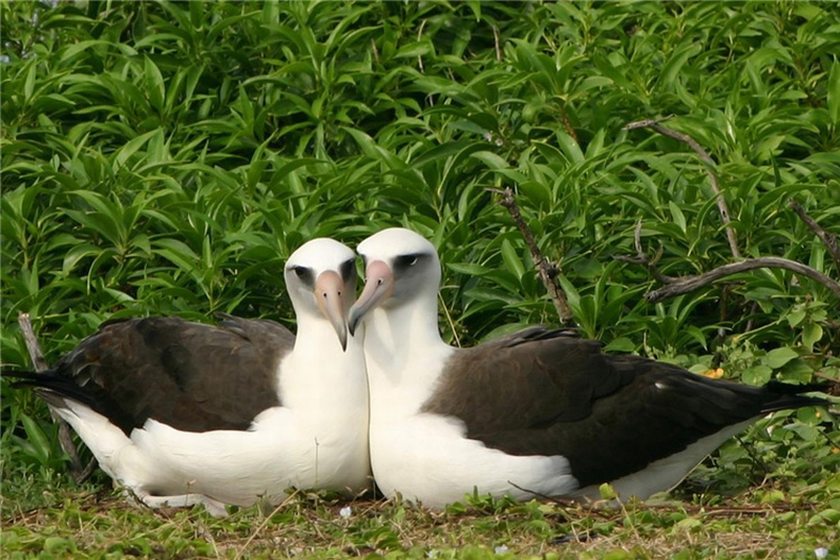 It might be hard for some people to believe, but there are actually quite a few gay animals out there. Scientific research has shown that individual members of a wide variety of species engage in homosexual behavior and enter into same-sex relationships.

The headlines you have probably seen about “The Lesbian Albatrosses,” “The Same-Sex Seagull Couples,” and “The Male Dolphins with Boyfriends” are true. There are even same-sex animal couples that adopt and raise offspring together. In the examples below, you’ll meet some of the gay animals and examine their world.

10 Gay Animals That You May Not Know

Scientists made an intriguing discovery about the Laysan albatrosses on the Hawaiian island of Oahu in 2007, 31% of the albatross couples they observed were actually lesbian. Researchers observed the birds kissing and nesting together much like human couples do. Lesbian albatross couples have been observed in other parts of the world, including New Zealand. Laysan albatrosses are one of the longest lived species in the world. An albatross named Wisdom was banded by the U.S. Geological Survey and seen raising a new chick on Midway Atoll in the Central Pacific in 2014. It isn’t known if the chick was Wisdom’s or one she adopted.

The aquatic mammals called dolphins or porpoises are among the most intelligent known creatures. They are also one of the most studied animals around. Researchers have observed numerous examples of same-sex relationships and even bisexual activity among dolphins. Dolphins are highly social creatures that form groups of varying sizes. They’ve also demonstrated signs of intelligence, including using tools and communicating with each other and humans. Research has shown that a bottlenose dolphin’s brain is almost as large as a human being’s.

Seagulls are one of the most common species of birds in the United States, yet they are also highly controversial. During the 1970s, a University of California biology professor studied a colony of the birds on the channel of Los Angeles and discovered that 14% of the couples he observed were lesbian. The research proved controversial and hard to believe. At first Hunt himself had a hard time realizing that the birds were engaged in same-sex relationships. He only made the determination after capturing some of the couples and examining them. Interestingly enough, Hunt also discovered that some of the gull couples were trying to hatch unfertilized eggs.

Same-sex couples have been observed in a number of different species of birds besides gulls and albatrosses. Two male king penguins at a zoo in Denmark actually made tabloid headlines when they paired up. The couple tried to steal eggs from other penguins and even tried to incubate a dead herring. Eventually zookeepers got the two to behave by giving them an egg to hatch. The two successfully hatched the egg and raised a chick. Zoos in Germany and New York have also had success in letting same-sex couples raise eggs. There is even a children’s book about one such couple.

Interestingly enough, researchers have discovered that some male African lions have their own version of gay culture. Instead of forming prides with groups of female lions, these kings of the jungle gather in male only groups. Some researchers actually believe that homosexuality is a common trait among lions. The researchers don’t know why the lions do this, but they speculate that the big cats’ strong sex drives might encourage same-sex relationships. Like dolphins, lions are very social creatures that live in groups called prides. One reason for the same-sex prides might be survival because the lioness, not the male lion, does the hunting.

A bonobo is an ape that is similar to a chimpanzee. Considered one of the most intelligent species in the world, these apes live in colonies. Scientists have observed many examples of homosexual behavior among bonobos, especially the females. Intriguingly, science has shown that the bonobo is the animal that is humanity’s closest living relative. Some experts believe that same-sex relationships are critical to bonobos’ social reactions. One belief is that bonobos use sex to resolve conflicts, which keeps them relatively peaceful. Researchers have also made the surprising discovery that almost all bonobos are bisexual, meaning they have sex with both males and females.

Both male and female members of this monkey species have been seen to engage in same-sex behavior. Researchers have noted that male macaques tend to have lots of “one night stands.” They also found that same-sex behavior often occurs during the monkeys’ breeding season. Matthew Grober, a biology professor at Georgia State University, has an interesting and simple theory to explain the macaques’ behavior. He thinks they engage in it because it is fun. The monkeys, he thinks, find certain kinds of behavior gratifying and engage in it for that reason.

Observers have noted that before mating with females, young male giraffes often display high levels of affection for other males. Kissing, neck massages, hugs, and more active relationships have been reported among these creatures. Some scientists have speculated that the giraffes practice mating before linking up with a female. The giraffe is the tallest known animal in the world and one of the most popular residents at zoos. Like lions, male giraffes have a pecking order in which the dominant or alpha male gets more access to females than others.

Scientists have observed that gay relationships between males are more common than male–female sex among bison, or American buffalo. Around 55% of the acts researchers recorded were between young male bison. The reason for this might be that male and female bison only mate around once a year. Even though they are popularly called buffalo, the proper name for these animals is bison. Similar behavior has been observed among other herd animals, including rams and sheep. Domestic rams are believed to be the gayest mammals in existence.

30 Body Languages and Their Meanings

7 Most Terrifying Facts About Space that Give You Chills

How Do Lobsters Breathe?