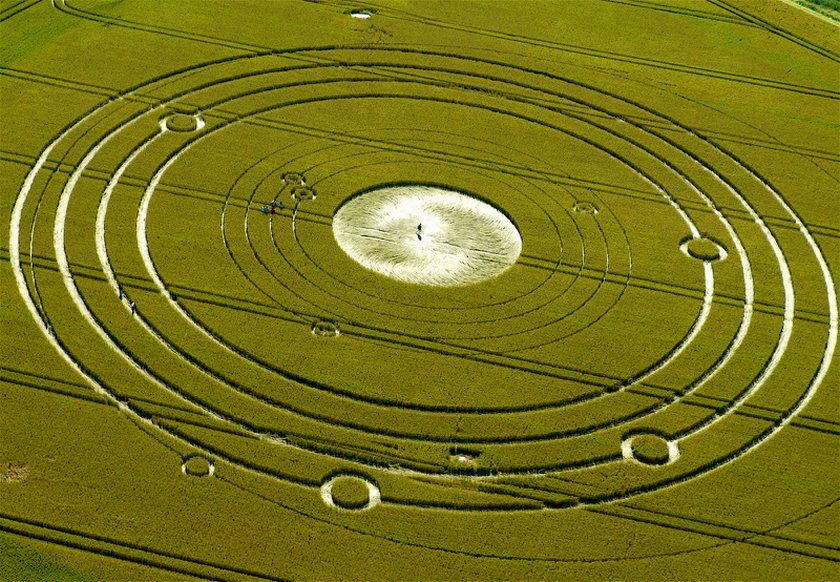 With modern advances in science many people claim that there are few, if any, mysteries left to be discovered. Submarines have probed the worlds' deepest oceans, NASA has taken photos of Mars and scientists have even managed to clone a sheep. Yet, despite the great leaps forward of human, mysteries and conspiracies still abound. The following list is a compilation of some of the most enduring unsolved mysteries of the world.

8 Unsolved Mysteries of the World

In 1966 an Australian sugar-cane farmer claimed to have seen a UFO rise up from a swamp and fly away. This led to the discovery of the first recorded crop circle, a primitive flattened circle within a field of crops. Since then, the worlds' obsession with all things "alien" has led to an abundance of crop circle discoveries, usually occurring overnight and becoming increasingly fantastic in shape as the years have gone by. The vast majority of crop circle claims have since been debunked, including that the circles leave higher levels of nitrate in the soil (found to actually be caused by nitrate based crop fertilizers) and that weird energy is felt in the vicinity of the crop circle (believed by scientists to be a "placebo" effect caused by believers who want to feel something). Yet, conspiracy theories continue to circulate.

There is no denying that this 500 year old archaeological site is a genuine construction, yet, Stonehenge remains shrouded in mystery. Constructed before the invention of the wheel, the builders somehow managed to transport great bluestone blocks over 240 miles to the site of Stonehenge – yet historians have no idea how or why such a monumental task was undertaken. Or why the stones were rearranged hundreds of years later into the shape we're familiar with today. Whilst there is some evidence that Stonehenge functioned as a burial ground, the site remains a perplexing mystery.

One of the lesser known, yet more intriguing mysteries of the world is the story of two children who appeared one day in Suffolk, UK during the 12th century. The brother and sister had green skin, spoke non-English and would eat nothing but pitch from bean pods. Once they had been taught English, the children claimed to be from the "Land of St Martin", a land where the sun never rose far beyond the horizon and where the inhabitants were all green. The children eventually lost their green coloring, but the boy grew sickly and died soon after being baptized. The girl, meanwhile, thrived in her new environment, although was later described as being somewhat "wanton" in her behavior. No explanation for the children's sudden appearance or otherworldly skin color was ever found.

Cicada 3301 is one of the newer of the world mysteries, beginning in January, 2012 and reoccurring in January every year since. It began with a series of complex puzzles posted online by someone referring to themselves "3301" and using the logo of a cicada. The puzzles involve mathematics, cryptography, literature and philosophy and include physical clues posted around the world in countries as diverse as Hawaii, Spain and Korea. The only explanation given is that they are looking for "intelligent individuals". Theories abound on who the author of these almost impossible puzzles are, with a popular notion that they are a recruitment tool for a secret organization such as MI6 or the FBI.

Acquired by a Polish-American antiquarian bookseller in 1912, the Voynich Manuscript is another of the ancient mysteries of the world. This 240 page book has been carbon dated as originating between 1404 and 1438, yet it is written in an undecipherable language and contains illustrations of odd events and plants that are unknown in our world. The unidentifiable biological drawings, combined with the clearly astronomical content have led many to speculate that the manuscript is of alien origin. Regardless of the many possibilities, one detail that theorists almost all agree on is that the manuscript is NOT a hoax.

Since the 19th century, one of the great mysteries of the world has been occurring regularly in the Norwegian valley of Hessdalen. Mysterious floating lights appear in the sky, ranging in color from blue to yellow to red, sometimes hovering just above the ground, sometimes streaking across the Nordic sky, but observed by far too many to discount as a hoax. During the 1980's in particular the lights were witnessed as many as 20 times per week! Scientists disagree on what causes this mysterious phenomenon, with suggestions including combustible particles, ionized dust and even extraterrestrial activity.

In Elbert County, Georgia, USA stands a granite monument nearly 6 meters high, inscribed with a set of ten guidelines in eight modern and four ancient languages (including Babylonian, Sanskrit and Egyptian hieroglyphics). The monument was commissioned in June 1979 by an unknown person operating under a false name. The guidelines repeatedly inscribed on these mighty granite slabs are principles for living, praised by some as sensible (with calls to unite humanity and protect nature) and denounced by others as unpractical and unsustainable (particularly the controversial first guideline to "maintain humanity under 500,000,000"). One theory postulates that the guidelines were intended for survivors of World War III, as a way to rebuild a shattered humanity, but the truth is, no one knows for sure who commissioned them built, or why.

On a summer evening in August, 1977, Jerry R. Ehman, a volunteer working with Search for Extraterrestrial Intelligence was monitoring radio waves from deep space in the hope of discovering an alien signal. Suddenly, Jerry saw his measurements spike in response to a loud signal being transmitted from the constellation Sagittarius, 120 light-years away in an area of space never reached by humans. Jerry was so amazed by his discovery that he wrote "Wow!" on the printout of the signal. Despite this amazing discovery, all attempts to re-locate the signal have failed, leaving the "Wow!" signal as one of the unsolved greatest mysteries of the world.

Deadliest Insects in the World

Animals with Very Long Pregnancies May Shock You

Why few people are left-handed